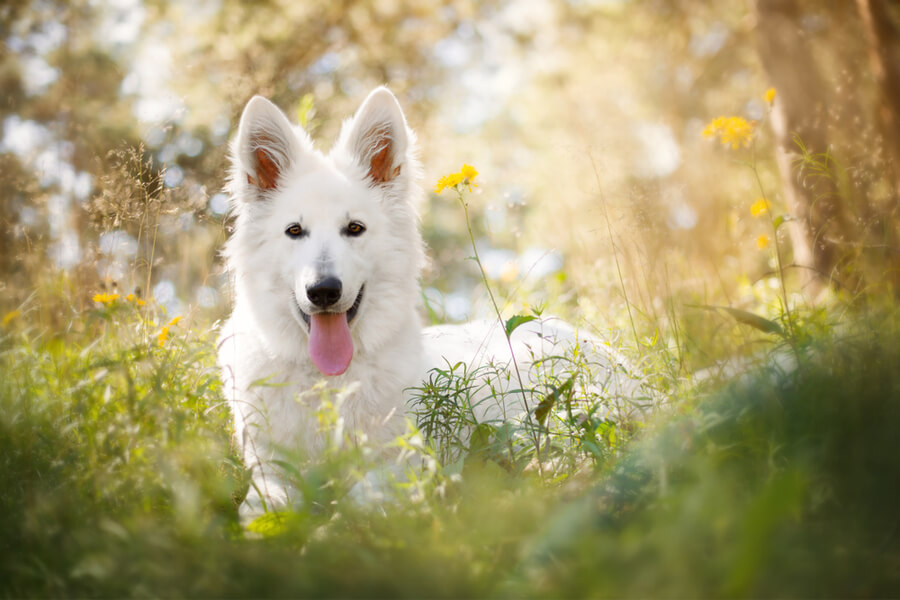 The White Swiss Shepherd is a robust and slender sheepdog with a white coat. It is a large dog that will weigh between 25 and 40 kilos and is very lively, intelligent, and with a strong desire to please its owner. He is very close to his owners and does not support solitude, but well trained, he is an extremely sociable dog which makes him a quality companion with children.

This breed is of such intelligence that the White Swiss Shepherd has been used as a shepherd dog, guide for the blind, guard dog, police dog, in the search and rescue services of the army.

Origin of the White Swiss Shepherd

It is to a Prussian cavalry officer, Max von Stephanitz, at the end of the 19th century that we owe the origins of the white swiss shepherd. The latter had the project of creating the ideal dog, which he wanted at the same time intelligent, balanced, of noble appearance and health of the body.

To do this, he crossed different farm dogs with very different physical characteristics, from morphology to color to coat length. From these crosses, he obtained the German Shepherd. The first German Shepherd would thus have had a white grandfather.

In the first years, the puppies of white color are present in the litters among the other puppies of gray, black, or fawn color.

But in 1933, the German Breed Club for German Shepherds decided to exclude the color white from the standard. From this point on, the white puppies are killed at birth and excluded from the litter. 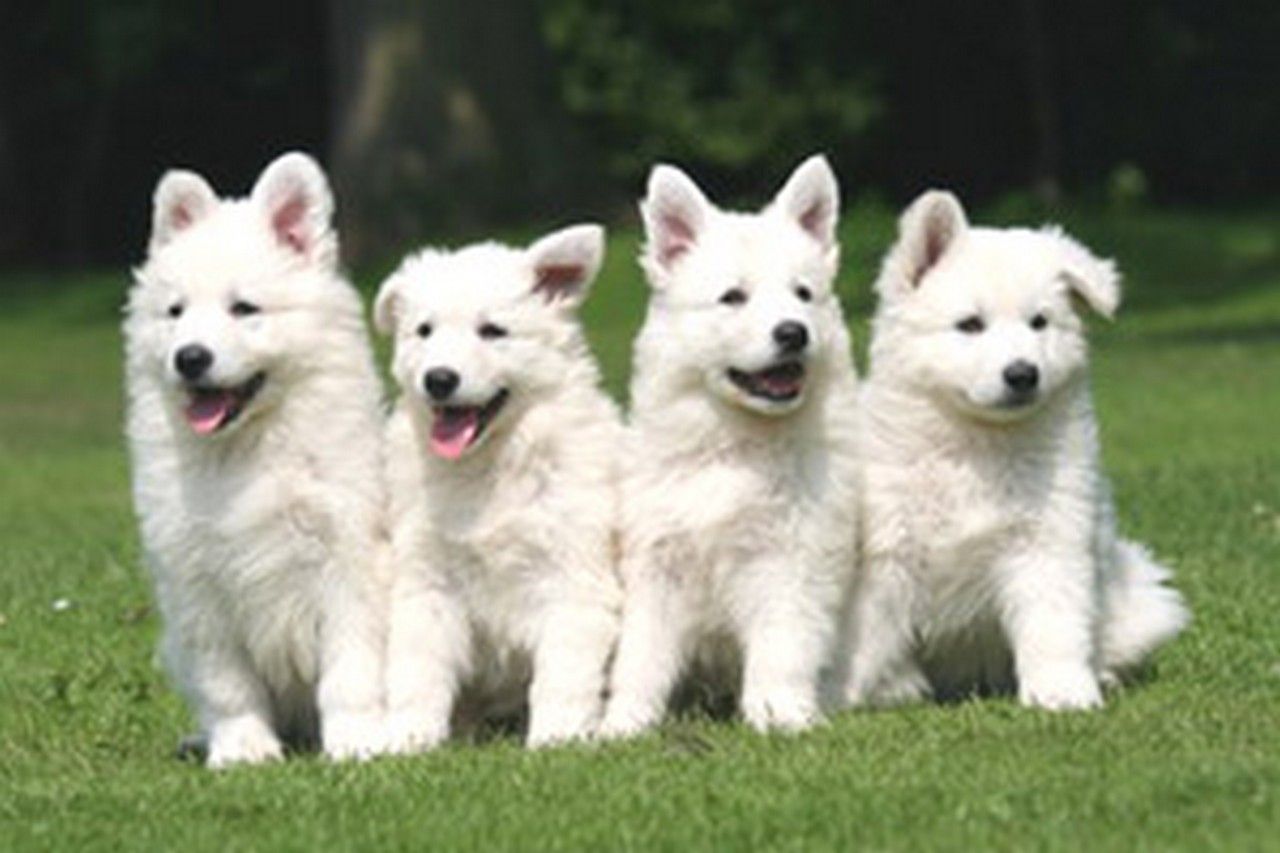 It was in the 1970s that it was reintroduced to Switzerland, from North America, under the name “Berger blanc américano-Canadienne”. Indeed, the white-robed shepherds having been declared undesirable in the standard, the breed was on the verge of being eradicated in Europe.

It was not until 2002 that it was recognized by the Fédération Cynologique Internationale under the name of “white swiss shepherd”. Subsequently, the white swiss shepherd breed quickly regained popularity in the European continent, and interestingly, particularly in Germany where it took its first steps so to speak.

The male white Swiss Shepherd Dog measures between 60 and 66 cm at the withers, and weighs between 30 and 40 kg.

The female, meanwhile, measures between 55 and 61 cm at the withers, and weighs between 25 and 35 kg.

The dog will reach its adult height around 12 months and will continue to grow in width until it is 18 months old.

There is only one color for the White Swiss Shepherd’s coat: white, as the name suggests!

Note that there are two types of a white swiss shepherd:

Eyes of the White Swiss Shepherd

There is only one color for the White Swiss Shepherd’s coat: white, as the name suggests!

It is saber-shaped and is particularly bushy. Tied rather low, it goes down at least to the hock.

It is a very balanced dog, lively, intelligent, calm but with a high need for outings and physical activities. Its character is very soft and very supple.

It is a dog very loyal to its owner and courageous: it has all the attributes of a good guard dog.

Naturally sociable, He cohabits well with other pets. He is by no means aggressive but can be reserved towards strangers.

As long as they treat him with respect, he also cohabits very well with the children he instinctively protects, which makes him a good family dog. Fairly docile and playful, it is a very valuable pet.

Is the White Swiss Shepherd Fearful?

Some say that the white swiss shepherd is fearful, which is not the case: he is neither fearful nor aggressive. It is more accurate to say that he is reserved with strangers or people he does not know. This is where the work of socialization, when he is still a puppy, is very important, to teach him not to be too “wild”. 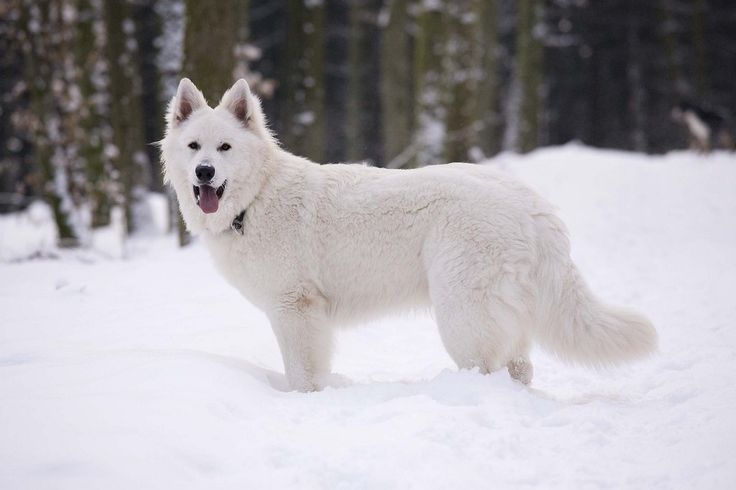 The White Swiss Shepherd and loneliness

This dog cannot live on his own: he does not support loneliness. Very close to his owner, he needs his presence by his side.

Be careful not to leave it alone for too long periods, it would be very unhappy and could cause damage to the house.

A monthly budget of having a White Swiss Shepherd

Because of its size, the most important expense item will be food. But depending on the diet chosen, the monthly budget dedicated to his diet may vary.

For example, a dog that we feed on a barf diet – with fresh meat exclusively – will cost you more than if you feed it with kibble. A dog fed with quality kibble will cost you between 50 and 60 euros per month.

There is also the health item and other drugs not to be neglected in the budget calculation. Don’t underestimate the cost of vet appointments and anti-parasite treatments. The dewormers are to be applied every 3 months in adulthood, which means 4 times a year.

For a large dog like the White Swiss Shepherd, they will cost you more than for a miniature poodle. Overall, you can expect a monthly budget of around 80 euros.

White Swiss Shepherd in the apartment?

Apartment life is not ideal for the White Swiss Shepherd Dog who needs a lot of energy and to be outdoors often.

It can adapt to apartment living if it is taken out two or three times a day for long walks. Plan from time to time a real outing in nature where he can let off steam, weekly for example. In any case, it is out of the question to leave this dog alone in the apartment all day.

The ideal remains living in a house with a garden (or interior courtyard). But even in this case, it will have to be taken out into the wild!

One thing is certain, he needs a teacher who has time to devote to him. Several hours a day of outings walks and physical exercises. For the health of your dog!

How to train a White Swiss Shepherd?

His intelligence makes him one of the easiest dogs to train. It will however have to be trained gently, without taking the path of severe discipline which would be counterproductive with this sensitive dog. Which doesn’t mean to use authority. It is about making the right balance between authority and violence. it is totally useless to hit a dog.

Don’t forget to socialize him well from the age of two months. Well-trained, you will make them a very sociable dog and fight against their tendency to be suspicious or reserved towards strangers. This dog shines in many activities such as agility, tracking, and defense.

As the white swiss shepherd is carnivorous, it is necessary to offer it a diet rich in meat so that it stays in good health as long as possible.

What kibble for a white swiss shepherd?

We advise you to opt for croquettes that have a protein rate of 35 or 40%. We also recommend that you buy him grain-free kibbles.

This dog often loses bits of hair and requires regular brushing: twice a week at least to let the skin breathe, and every day during the molting period when the hair loss intensifies.

And daily if you want to avoid hair loss as much as possible all over the house. It’s up to you to see what suits you best.

Advantage of this dog: his coat is “self-cleaning”. Thus, it is recommended to give it a bath only when it is really necessary. Once a year is sufficient, but no more than twice a year. Regularly check the ears and trim the claws.

The White Swiss Shepherd has a reputation for being a robust dog. However, there are some illnesses to watch out for.

The White Swiss Shepherd and disease

The White Swiss Shepherd is susceptible to developing hip or elbow dysplasia. Check that both parents of the puppy have healthy hips with the breeder.

Dogs of this breed can also be prone to diarrhea and need to be well protected against fleas and ticks. In the case of parasitic infection, take special care to take good care of your animal.

Note also on the emotional level a hyper-attachment to his owner.

Your white swiss shepherd normally lasts between 12 and 15 years.

To keep him alive as long as possible, provide him with quality food and organize yourself so that he can go out a lot and regularly.

Are you made to live with a white swiss shepherd?

If you are away a lot, or are busy with your work and don’t have a lot of time to devote to your dog, a white swiss shepherd might not be the dog for you. 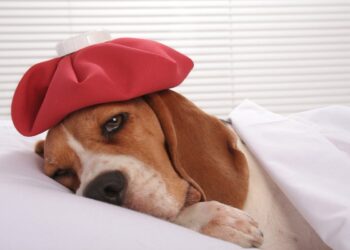 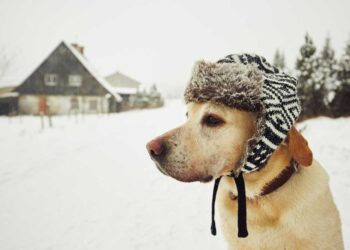