Abyssinian Cat – Size, Color, lifespan and all You Need to Know 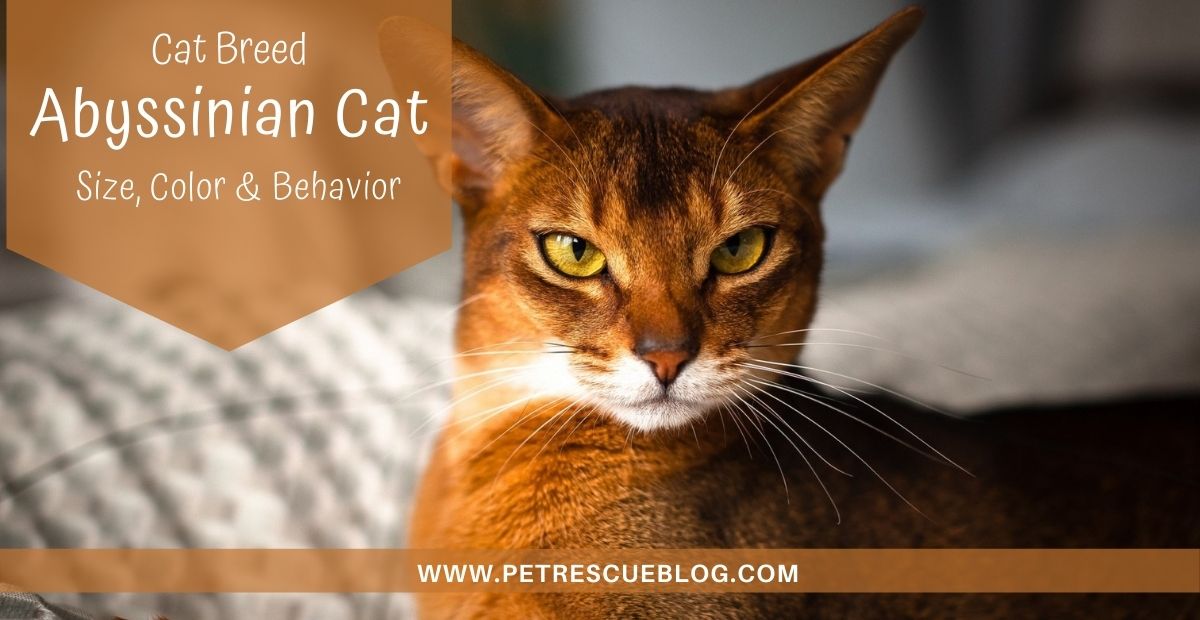 Under Abyssinian cat, elegant air that would seem almost haughty hides an extremely affectionate and dynamic cat. Totally devoted to his masters, this outstanding growth in return requires constant attention, games, hugs, everything is good as long as it is spent in your presence. The Abyssinian does not tolerate loneliness very well and is the ideal companion for a large family with children and other pets.

Physical characteristics of the breed

Some claim that the Abyssinian meets the criteria for feline beauty. He is muscular, flexible and moves with elegance. Its short, dense coat is however very soft. For an Abyssinian to be recognized as such, his coat must be tagged. It is not characterized by a particular color and we find several shades of

Abyssinians with blue coats are quite rare and this dress is absolutely remarkable and mixes warm beiges on the lower limbs and shades of blue on the upper body.

Abyssinian hairs are the most common. Unsurprisingly, his coat is reminiscent of the color of the hair. Each hair alternates several colors, often red at the base and dark at its tip. The belly is completely red and the tips are black or brown.

Although the Abyssinian must have a speckled coat to be considered “purebred”, the Rufous Abyssinians appear to have only one orange color. If we take a closer look, we realize that the animal’s coat is made up of several shades of red.

Characteristics of This Breed

What are the character traits of this breed? This very playful and sociable cat needs people around him and attention to thrive. He gets along very well with children and with dogs. His hunting instincts make him ruthless on smaller animals, so avoid investing in a rodent.

The Abyssinian cat is a clever and very affectionate cat, even if he really only attaches himself to one person who will be his reference in a way. This person takes on a great responsibility since the Abyssinian cat is very intelligent and needs a lot of attention and stimulation. He also knows perfectly well how to make himself understood and to demand thanks to untimely meows (even if he does not meow very loudly) and rubbing against your legs.

This unconditional love for one person does not prevent him from being infinitely sociable and from welcoming with joy anyone who wants to have fun with him!

He is also independent and can decide to have fun on his own, provided that he has something to occupy himself with and that there is still a presence around. Its intelligence not only gives it the need for stimulation, but it can also have a tendency to escape, for example in pursuit of prey.

Read Also: Cat In Heat – How To Identify and Help Her

How to train your Abyssinian cat?

Do not separate your Abyssinian cat from its mother too soon. The Abyssinian kitten needs to stay with her long enough to acquire the rules of social life and the autonomy necessary to become a serene and balanced cat.

Once you arrive home, your little Abyssinian will be very turbulent. Playful and dynamic, it’s not in his nature to be calm, and there’s no point in trying to reframe him, he’s just not a cat who likes solitude or being quiet. To train him, it will therefore be necessary to bet everything on the game. Thanks to his intelligence, he will quickly remember your instructions, especially if you teach them in a fun way.

Take him to his litter box as soon as necessary or train him to defecate outside. To relieve his claws and teeth, provide him with suitable accessories such as a good scraper (the rope trunk of your cat tree will do) and small rubber toys that he can chew on.

The Abyssinian likes to jump and hide and the cat tree, if possible large in size, is therefore recommended even if it cannot fully channel your Abyssinian cat’s energy. This breed thrives outdoors, so it is essential that you also have a large balcony or garden.

This cat does not tolerate loneliness very well, if you are not present and/or are very busy, this cat is not for you. The Abyssinian needs a master who stimulates him on a daily basis and plays with him. A good alternative may be to invest in another pet such as a dog, with whom he usually gets along very well, or another cat.

Avoid small animals such as rodents or birds, even in cages. The Abyssinian is an intelligent and very agile cat with a formidable hunting instinct that would make short work of your little companions.

The Abyssinian cat expends itself enormously. It is, therefore, necessary to offer him quality croquettes, rich in nutrients, vitamins, and proteins, specially adapted to his physiology.

Warning! Despite its slender appearance, the Abyssinian cat needs more inputs than other cats with similar morphology, but less likely to exert themselves. So be sure to give him food accordingly.

Even if this pleases the cat and prevents the owners from wasting it, giving them your leftover human food is strongly discouraged. Human food is often too fatty for felines. If you want to spoil him, treat him to treats specially designed for cats. These are also excellent for his teeth. You can also show him attention by giving him tummy scratches or playing with him.

How to take care of the health of your Abyssinian?

Due to its short coat, the Abyssinian cat does not need too restrictive maintenance. As with all cats, we recommend brushing it once a week and doubling the speed during the molting period. It is a very clean cat which cleans itself a lot and it is like all its congeners likely to swallow its dead hair during its toilet. 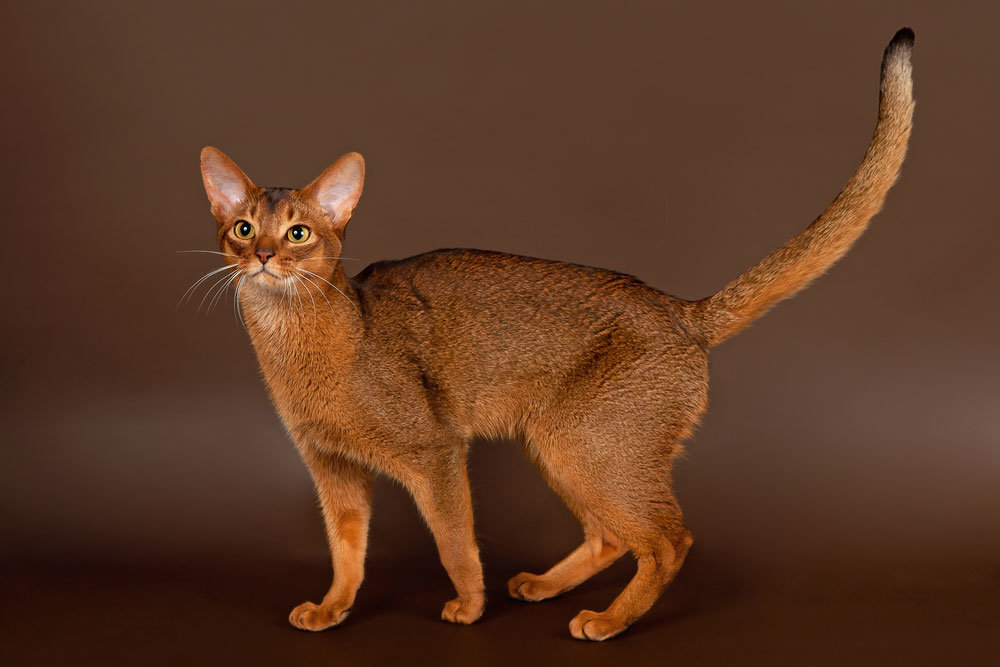 Ultimately, the accumulation of dead hairs in the digestive system can cause serious intestinal obstruction. The Abyssinian is an outdoor cat, he will go himself to find the grass that will allow him to purge himself. However, you can boost this process by offering suitable malt-based products, specially designed to promote purging in felines.

File its claws when they are too long. The fact that he likes to exercise outdoors increases his risk of getting a paw caught or a claw twisted, which is extremely painful.

Check his ears and eyes from time to time and wash them gently in lukewarm water without using soap or detergent.

Also Read: Cats With Down Syndrome, Myth Or Reality?

Diseases of the Abyssinian cat

Like all cats, the Abyssinian has its share of genetic diseases due to an impoverishment of the breed. In question, a little too greedy Abyssinian breeders who do not test the individuals intended for reproduction. It is therefore extremely important to choose breeding with integrity and respect for its animals.

The most well-known disease among the Abyssinian breed is cat amyloidosis. This congenital disease is extremely dangerous and proves fatal in the more or less long term since it causes incurable kidney failure. The Abyssinian cat is also particularly sensitive to progressive retinal atrophy, which progressively deteriorates its sight to the point of making it blind.

It is important to vaccinate your cat against leukosis, coryza and rabies. The booster shot, which must take place every year, provides an opportunity for a complete routine examination by a veterinarian.

Some Anecdotes about Abyssinian cats

The history of this breed of cat is fascinating since it is one of the oldest feline species. So old, that it is even difficult to know when it appeared and what are its real origins. Some claim that the Abyssinian cat comes from Asia, although the different colors of its coat are not found at all among other Asian cats.

Another track leads us to Egypt since he would be a descendant of the Egyptian sacred cats. It is true that, when one admires the engravings of these famous cats on the sarcophagi, the resemblance is striking! Besides, it seems that Ramses II owned an Abyssinian cat!

This cat arrived in Europe in the 19th century in the suitcases of the English Marshal Sir Robert Napier. Named Zula, this first Abyssinian individual to have set foot in old Europe, is presented at the Crystal Palace in London. It very quickly arouses the enthusiasm of the local populations who decide to create their own breed of Abyssinian by carrying out complex crosses.

This cat corresponding to the standards of feline beauty would be the worthy descendant of the Egyptian sacred cats. Still popular with men today, the Abyssinian requires a lot of attention and is intended for families ready to devote time and a lot of energy.

Playful, fiery, the Abyssinian has a perpetual need to be stimulated. In return, he is very tender and devoted and the relationship that is therefore created between an Abyssinian and his master is deep and lasting.

But, do not be fooled by its thin and slender morphology! This cat needs a fairly substantial intake of food. Be sure to offer him food rich in nutrients.

How Expensive is it To Own a Pet Snake? 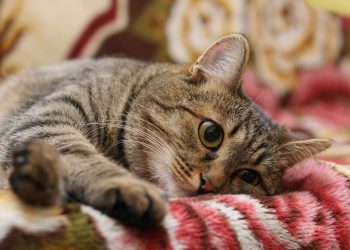 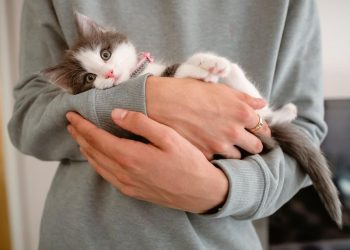 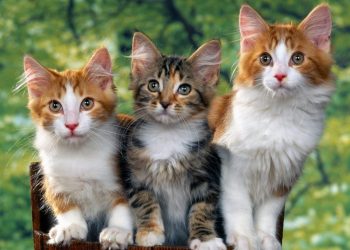 How Expensive is it To Own a Pet Snake?