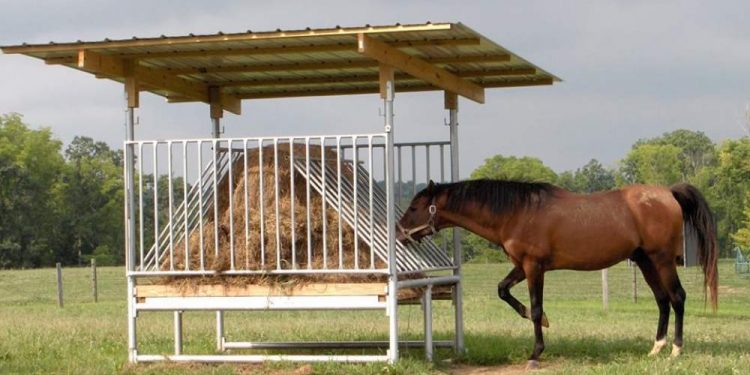 In recent years, grain-free horse feed has become fashionable, and many people talk about it and praise its benefits. What is behind this trend: to begin with, what cereals are present in the horse’s food? How did the horse come to be fed grain while it grazed pasture grass? What are the disadvantages of a cereal-based horse feed, and what are the risks associated with their overconsumption? When can we give him cereals, and what alternatives, ie which grain-free horse foods are available? We answer all of these questions in this article.

What cereals are found in the diet of horses?

Cereals are defined in Larousse as follows: “Name given to grasses and certain plants from other families, cultivated for their grains, which are used as food for humans and domestic animals”.

Of these, oats, barley, corn and wheat are the best known and most popular. They are found in the horse’s diet in the form of seeds in the natural state, or in the form of compound feed, such as granules or muesli. Oats is the cereal that, among all the cereals available, is essential for its lower content of carbohydrates (sugars and starch) as well as for its higher proportion of fiber; especially since it does not require treatment beforehand. 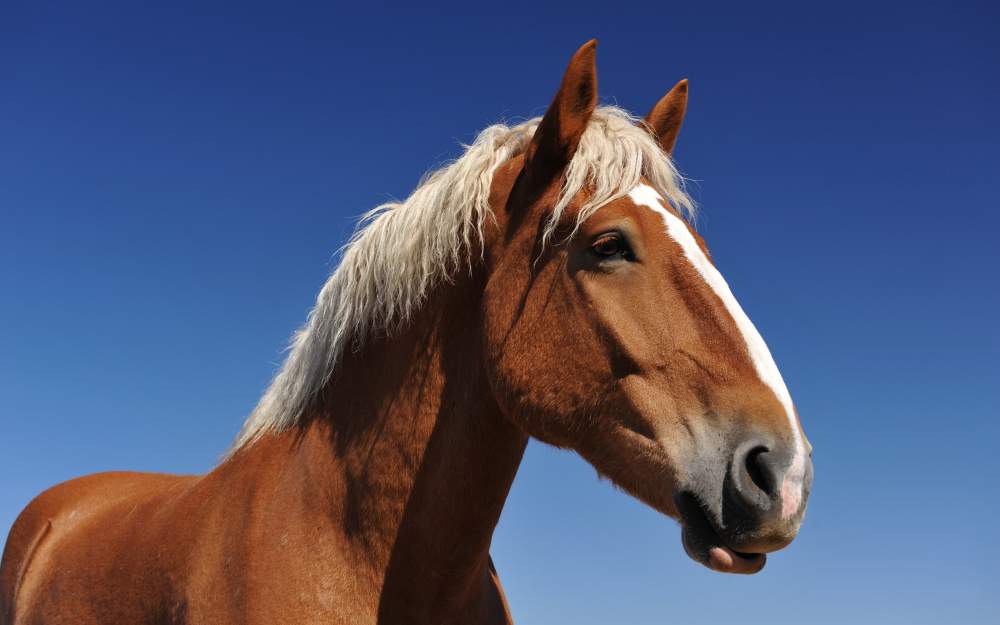 In the past, it was the most used for feeding horses, especially because of its low cost, but this last point has changed a little recently. Nowadays, the most used cereal in horse feed is barley: it offers an interesting amount of energy and is also inexpensive.

Rye, wheat, and spelled: better to avoid them

For its digestive well-being, limit spelled wheat and rye in your horse’s diet.

It is rare to see rye (or wheat) in the diet of horses. Rye has a very high protein content and over-demands the delicate metabolism of the horse. Due to its high proportion of gluten, it can lead to gelatinization in the gastrointestinal tract of the horse, thus increasing the risk of digestive disorders and colic.

Wheat straw, commonly used as bedding, is used as roughage and is not a problem. Wheat grains, on the other hand, as with rye, due to their high starch and gluten content, strain the metabolism and digestion of the horse.

There is also spelled, very similar to wheat.
We know gluten for its propensity in us humans to trigger allergies. Well, spelled, like wheat, over-demands the horse’s intestines. Raw, the grain will stick to the intestinal villi and impact the mucous membrane.

From pasture grass to grain

The horse is a herbivore

We do not necessarily remember it, as it has become common to give it cereals, but the horse is a herbivorous animal, and a strict herbivore one could even say. In the wild, its basic diet consists of grass, forage plants, and legumes. And above all, it does not consume cereals in nature.

A digestive system adapted to the pasture

A little physiology reminder: the horse has a small stomach and a very long large intestine. This particular configuration of its digestive tract is particularly well suited for the ingestion of crude fiber, in combination with a food intake distributed over many small meals. This is also the way horses eat in the wild or naturally, which spends most of their time looking for their food and grazing on the grass.

A regular intake and in small amounts of dietary fiber … Mother Nature does things well! Because yes, the grass of meadows and pastures (as well as hay, which represents a dried version of it) is an ideal food for the horse. Rich in fiber, it is low in energy and allows him to eat in large quantities without gaining weight.

Why did humans introduce cereals in the horse’s diet?

In the wild, the horse grazes grass, not grain. The addition of cereals to his diet is due only to human intervention. This goes hand in hand with the domestication of the horse and a need for increased performance for work or exercises. 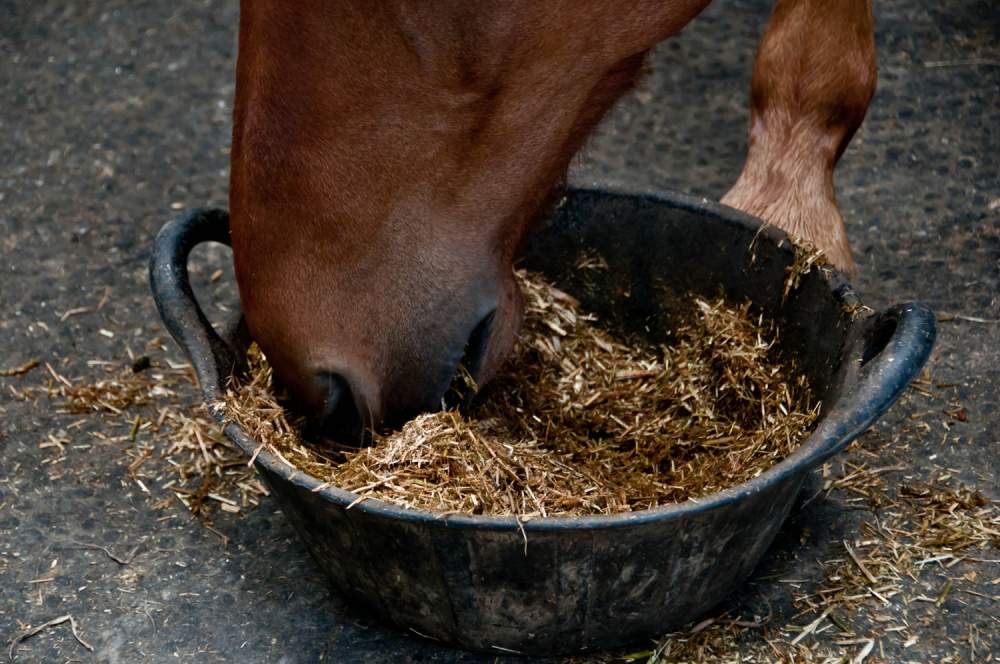 The man who used the horse for agricultural or warlike purposes wanted his horse to recover quickly, but it took too long to feed him only grass and hay. This is how he turned to cereals for their rapid energy supply, and their lower volume in transport (hay is very bulky!).

The disadvantages of cereals

Cereals contain only a small proportion of fiber: less than 10% for corn and barley, compared with a rate of more than 90% for meadow hay, and more than 60% for meadow hay. grazed grass. They can therefore in no case constitute the only food of the horse.

This is why the basis of the diet must always include a supply of fodder (grazed grass, or hay on the basis of 1.5 kg per 100 kg of live weight) to which it is supplemented if necessary with cereals, in order to respond to the maintenance of its physiological and psychological balance.

The protein content of grains is also relatively low: less than 100 grams of crude protein per kilogram of dry matter for corn, barley, and oats. However, forages are not very rich in protein either. For example, the protein content of meadow hay or wheat straw is lower than that of the three kinds of cereal mentioned above. 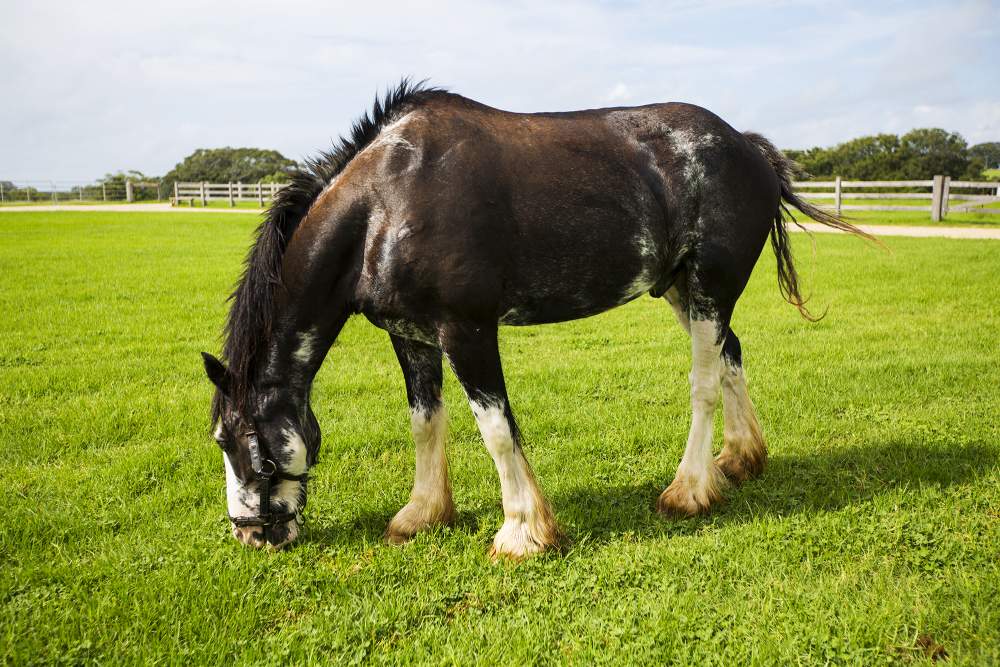 However, in some specific cases (growing foal, pregnant or lactating mare, horse developing muscle mass for work, or recovering condition), the combination of roughage and cereals is not sufficient to cover the need. protein, and it is then necessary to add foods rich in protein such as soybean, flax, or rapeseed cake for example.

How is the starch in cereals dangerous?

The rapid energy supply of cereals is mainly due to the presence of starch.

What is starch and where is it found?

Starch is a complex sugar; it is part of the carbohydrate family and one of its advantages is that it can deliver energy quickly, but its major disadvantage is that horses have difficulty digesting it. It is present in different proportions according to the types of cereals: corn contains more than 60%, barley, and rye a little more than 50%, oats contain 36%, and wheat bran 20%. As for the straw, it contains only 1%.

In excess, it can promote the appearance of diseases

As a species, the horse has few starch processing enzymes available in its intestines, and when too much is ingested, the undigested part in the small intestine will reach the large intestines. intestine and its fermentation will continue there.

This disturbs the digestive process of the large intestine and can lead to colic, irritation of the mucous membranes, laminitis, or other metabolic diseases in the horse. Starch can be digested by the horse but in small amounts. It is therefore important that cereals that contain starch are given in a limited and digestible quantity.

When can you feed grain to a horse?

As we have seen previously, grass and other roughage are high in nutrients and are low in energy. When, in addition to fodder, you feed your horse with cereals, you provide it with a lot of energy at once (the energy quantity per kilo of cereals being much greater than that of grass, its staple natural food ).
But if you have a sport horse that exerts a lot of energy, it makes sense. 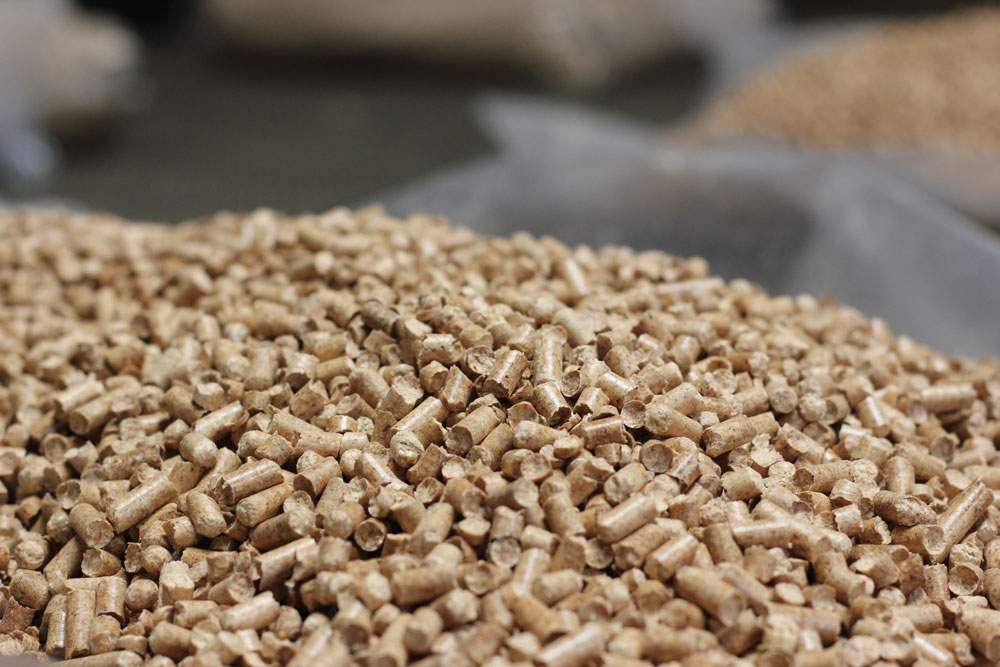 On the other hand, if you own an elderly or retired horse, or simply a horse that has very limited activity, it is quite different: these horses do not necessarily need cereals to cover their low energy needs. Conversely, if you give too much starch and sugar (in the form of cereals) to a less active horse, then it runs an increased risk of metabolic diseases and overweight.

Let’s start by recalling the basics: focus on hay supply and grazing, in the meadow or in the paddock, as much as possible. there is no excess in roughage intake. A Vitamin-Mineral Supplement (which is sometimes shortened by the acronym CMV) is the second essential component for a healthy and balanced diet of the horse. Here too, there are cereal-free mineral feeds, especially for horses with metabolic disorders.

Natural foods specially developed according to their needs

Herbs and Root Vegetables product: this is a grain-free recipe with reduced sugar and starch content. Inspired by natural grazing, it has high fiber content and is ideal for horses who have normal nutritional needs, or who perform light work.

It is also a very good choice for horses prone to metabolic disorders. Beer pomace and brewer’s yeast have also been incorporated into the recipe to keep the horse shiny coat and healthy hooves. This product also provides an optimal supply of minerals, vitamins, and trace elements.

Admittedly, a food ration composed of fodder and cereals does not cover all the food needs of the horse, and a mineralized complementary food is essential. But that doesn’t mean that you have to exclude cereals from your diet.

In some cases, such as that of a sport horse with high energy requirements, a growing foal, a lactating or late gestation mare, cereals are very useful in providing the carbohydrate energy that the roughage alone is not capable of delivering. But yes, there are certain risks in consuming cereals, and the ratio must be controlled. If you want to return to a diet that is closer to the horse’s natural diet, or if you want to limit starch intake (imposed in certain cases,

How to Find Your New Puppy 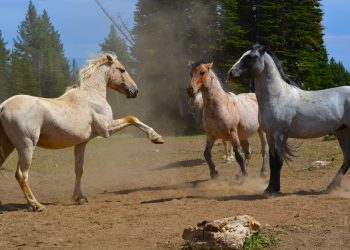 How to Find Your New Puppy